A mediator is a person who is a “go between” or intercedes between two parties. In the Old Testament, this role is well documented and held by a host of individuals at various times. Perhaps the best-known individual in the Old Testament to mediate between God and the people was Moses, the deliverer, leader and lawgiver of the nation of Israel. 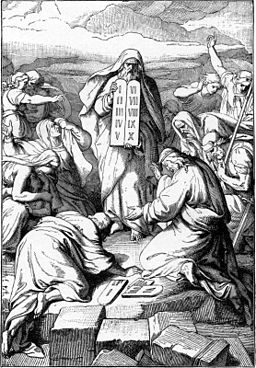 In Exodus 20, the account of the nation of Israel receiving the Ten Commandments is recorded. Once Moses had spoken those words to the people, they experienced terrifying the thunder and lightning and the sound of a trumpet and the mountain smoking. This frightened the people so that they moved away from the mountain. The people then told Moses that they wanted him to be their mediator to God: “Now when all the people saw the thunder and the flashes of lightning and the sound of the trumpet and the mountain smoking, the people were afraid and trembled, and they stood far off and said to Moses, “You speak to us, and we will listen; but do not let God speak to us, lest we die.” Moses said to the people, “Do not fear, for God has come to test you, that the fear of him may be before you, that you may not sin.” The people stood far off, while Moses drew near to the thick darkness where God was. And the LORD said to Moses, “Thus you shall say to the people of Israel: ‘You have seen for yourselves that I have talked with you from heaven“ (Exodus 20:18-22, ESV).

The prophet Isaiah records that coming Messiah, who we know to be Jesus, would be the “mediator” between God and humanity. “Therefore I will divide him a portion with the many, and he shall divide the spoil with the strong, because he poured out his soul to death and was numbered with the transgressors; yet he bore the sin of many, and makes intercession for the transgressors” (Isaiah 53:12, ESV).

Now the point in what we are saying is this: we have such a high priest, one who is seated at the right hand of the throne of the Majesty in heaven, a minister in the holy places, in the true tent that the Lord set up, not man. For every high priest is appointed to offer gifts and sacrifices; thus it is necessary for this priest also to have something to offer. Now if he were on earth, he would not be a priest at all, since there are priests who offer gifts according to the law. They serve a copy and shadow of the heavenly things. For when Moses was about to erect the tent, he was instructed by God, saying, “See that you make everything according to the pattern that was shown you on the mountain.” But as it is, Christ has obtained a ministry that is as much more excellent than the old as the covenant he mediates is better, since it is enacted on better promises” (Hebrews 8:1-6, ESV).

Therefore he is the mediator of a new covenant, so that those who are called may receive the promised eternal inheritance, since a death has occurred that redeems them from the transgressions committed under the first covenant (Hebrews 9:15, ESV).

The apostle Paul speaks to the believers regarding the intercession that Jesus makes on their behalf: “He who did not spare his own Son but gave him up for us all, how will he not also with him graciously give us all things? Who shall bring any charge against God’s elect? It is God who justifies. Who is to condemn? Christ Jesus is the one who died–more than that, who was raised–who is at the right hand of God, who indeed is interceding for us” (Romans 8:32-34,
ESV).

Jesus is the mediator of the New Covenant or New Testament. The scriptures go on to say that Jesus is the mediator to God for those who are called according the to promised eternal inheritance. The following passage further elaborates on who “the called” are: “…but he [Jesus] holds his priesthood permanently, because he continues forever. Consequently, he is able to save to the uttermost those who draw near to God through him, since he always lives to make intercession for them. For it was indeed fitting that we should have such a high priest, holy, innocent, unstained, separated from sinners, and exalted above the heavens. He has no need, like those high priests, to offer sacrifices daily, first for his own sins and then for those of the people, since he did this once for all when he offered up himself. For the law appoints men in their weakness as high priests, but the word of the oath, which came later than the law, appoints a Son who has been made perfect forever” (Hebrews 7:24-28, ESV).

Our heavenly Father has appointed His Son Jesus as the mediator between believers and Himself. Because Jesus was tempted like we are, yet did not sin and offered himself as a sacrifice for our sins, he is in the unique position to mediate for us to the Father. When we pray to our heavenly Father, we are to do so through His Son, our Saviour, High Priest and Mediator, Jesus the Christ.

The Bible can help to bring about peace of mind. I

The Bible doesn’t beat around the bush when it t

The Bible is full of stories of loyalty, love, cou