Skip to content
Home
The Word of God: Alive and Active
Bible Study
Understanding the Book of Revelation: Interpretation

In this post I will consider the “big” question about interpreting the book of Revelation. To do this, I will use a number of examples from Revelation chapter 1.

There are some guiding principles to interpretation when it comes to the Bible. The apostle Peter tells us that the Word of God is not to be understood by a person’s own private interpretation.

And we have something more sure, the prophetic word, to which you will do well to pay attention as to a lamp shining in a dark place, until the day dawns and the morning star rises in your hearts, knowing this first of all, that no prophecy of Scripture comes from someone’s own interpretation. For no prophecy was ever produced by the will of man, but men spoke from God as they were carried along by the Holy Spirit. (2 Peter 1:19-21, ESV)

This means that we need to turn to the Bible to gain the information we need to understand it the way God intended it to be understood.

In the two previous posts, “Context and Questions” and “Observation”, I provided you with information to better understand the book of Revelation.

This helps us because we know the interpretation is from the end of the 1st century A.D. and covers at least the next 2,000 years. It also tells us that the information pertains to the Christian area, or what as Jesus terms it, “the times of the Gentiles” (Luke 22:24). Incidentally, in Luke 22, Jesus is warning about the time when the Temple in Jerusalem would be destroyed and the era that would follow until his return from heaven.

Furthermore, it is always important to start with the first chapter when trying to understand the entire book. Revelation 1 lays the foundation for what follows. So, lets look at “interpretation” by considering the following 2 symbols: The Trumpet; and the Lampstand.

The following questions will help provide some consistent direction:

1. Where is this symbol mentioned in the Bible?

Using a word-search tool in my Bible Desktop program, “trumpet(s) is used in 110 verses in the entire Bible, in both the Old and New Testaments.

2. How is this symbol used in the Bible? 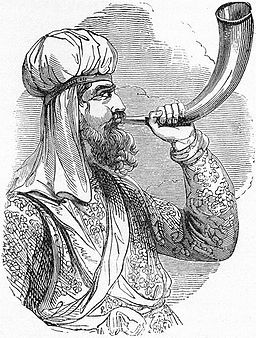 3. Is there any historical information about this symbol that may be helpful?

“A trumpet is a brass instrument commonly used in classical and jazz ensembles. The trumpet group contains the instruments with the highest register in the brass family. Trumpet-like instruments have historically been used as signaling devices in battle or hunting, with examples dating back to at least 1500 BC; they began to be used as musical instruments only in the late 14th or early 15th century. Trumpets are used in art music styles, for instance in orchestras, concert bands, and jazz ensembles, as well as in popular music. They are played by blowing air through nearly-closed lips (called the player’s embouchure), producing a “buzzing” sound that starts a standing wave vibration in the air column inside the instrument. Since the late 15th century they have primarily been constructed of brass tubing, usually bent twice into a rounded rectangular shape.” [1]

4. What is said about this symbol in the chapter I am reading?

In Revelation 1, John said “I was in the Spirit on the Lord’s day, and I heard behind me a loud voice like a trumpet saying, “Write what you see in a book and send it to the seven churches, to Ephesus and to Smyrna and to Pergamum and to Thyatira and to Sardis and to Philadelphia and to Laodicea.'”

When John turned to see the voice, he saw the seven golden lampstands and the “one like the son of man”.

5. Where is this symbol mentioned in the sequence of events in the book of Revelation?

Following this first use in of the trumpet in Revelation 1, it is used in:
Revelation 4 – Occurs after the message to the 7 churches in Asia
Revelation 8 – During the opening of the 7th seal (4 trumpets are blown)
Revelation 9 – Trumpets 5 and 6 are blown
Revelation 10 – The 7 Thunders are sealed up
Revelation 11 – The 7th Trumpet begins to sound announcing God’s Kingdom
Revelation 18 – Announces the destruction of Babylon, the Great

6. Does the book of Revelation or other books of the Bible provide an interpretation to this symbol?

The use of the trumpet throughout the Scriptures provides the interpretation of the trumpet. It is not used as much for musical enjoyment in the Bible, but rather it was used to announce, summon or notify God’s people. This means that although audible to others, not everyone will know what the sound of the trumpet means.

The reader is introduced to the trumpet in the book of Revelation as “a voice like a trumpet”. This indicates that the announcement, summons or notification may not be from a literal trumpet, because the trumpet was only the method of communication.

7. What do I understand this symbol to mean in the context of the book of Revelation?

In the context of the book of Revelation, the Trumpet is a symbol of communication to God’s people. It initially tells John to write to the 7 churches of Asia. The Trumpet is the second in the sequence of unfolding events, beginning at the opening of the 7th seal and preceding the pouring out of the 7 Bowls and sounding of the 7 Thunders. This would indicate that, at the least, the first 6 Trumpets are historical events, occurring earlier on, after the end of the 1st century, rather that closer to our time. Ultimately, the Trumpet is used to announce the establishment of God’s Kingdom.

1. Where is this symbol mentioned in the Bible?

Using a word-search tool in my Bible Desktop program, “lampstand” is used in 38 verses in the entire Bible, in both the Old and New Testaments.

2. How is this symbol used in the Bible?

3. Is there any historical information about this symbol that may be helpful?

“The menorah (/məˈnɔːrə/; Hebrew: מְנוֹרָה [mənoːˈɾaː]) is described in the Bible as the seven-lamp (six branches) ancient Hebrew lampstand made of pure gold and used in the portable sanctuary set up by Moses in the wilderness and later in the Temple in Jerusalem. Fresh olive oil of the purest quality was burned daily to light its lamps. The menorah has been a symbol of Judaism since ancient times and is the emblem on the coat of arms of the modern state of Israel.”[2]

It is obvious that a lampstand is for the purpose of providing light.

2. What is said about this symbol in the chapter I am reading?

3. Where is this symbol mentioned in the sequence of events in the book of Revelation?

Following the first use in of the lampstand in Revelation 1, it is used in:

Revelation 2 – Speaking to the church at Ephesus, the “one like the son of man” mentions that he walks among the 7 golden lampstands. He warns if they do not repent, he will remove their lampstand or Church.

Revelation 11 – There are now 2 lampstands and they stand before the Lord of the earth. This is during the 6th Trumpet period and the 2nd Woe (verses 4,14,15).

4. Does the book of Revelation or other books of the Bible provide an interpretation to this symbol?

The interpretation of the 7 golden lampstands is provided in Revelation 1:20 where the lampstands are the seven churches.
In Revelation 11:1-4, the two lampstands (and the two Olive Trees) are witnesses that will prophecy in sackcloth for 1,260 days. In the Old Testament, Zechariah 4, there is a lampstand with 7 lamps and 2 olive trees. In Zechariah 4:14, they are “the two anointed one who stand by the Lord of the whole earth”.

5. What do I understand this symbol to mean in the context of the book of Revelation?

There are two types of lampstands in the book of Revelation: The 7 golden lampstands (chapters 1 & 2) and the two lampstands (chapter 11). In the previous post, I mentioned that seven is the Biblical number of completion or perfection. Gold in the Bible is precious and represents those who have endured trials (1 Peter 1:7). The 7 golden lampstands are the churches that are going through persecution. If they do not endure and repent, their churches will be removed. The two witnesses are anointed and are Godly. They may be a group of enduring believers during the period indicated by the 6th Trumpet and 2nd Woe period, which according to this structure of interpretation would be historical to us today.

In this post, I have tried to demonstrate how the structure and background of the book of Revelation provides for a foundation and principles of interpretation. I chose two symbols from Revelation 1 to illustrate how to determine what the symbol means and where it is used in the sequence of events outlined in the book.

I have deliberately not provided references or commentaries on the book of Revelation as there are so many different “interpretations” including: The book being completely historical; mostly literal; a mixture of historical and literal and symbolic; present day; mostly or completely symbolic; to completely futuristic.

I believe from the information presented in Revelation 1, the book is prophetic at the end of the 1st century to the time of Jesus’ return to the earth (still future to us) and mostly symbolic. Because a chronology or sequence of events is given, as well as information in the other books of the Bible regarding the symbols, some homework will greatly assist us to determine what the symbol means and where it is placed. If the period of the symbol is history to us, we can look through the period of history and try to align the qualities of the symbol from the Bible to historical people, nations, organizations or locations.

The book of Revelation is not an easy book; however, to apply the method I have suggested means that it requires us to become very familiar with the previous 65 books of God’s Word and that is a great thing to do. Enjoy!

Join our private Facebook Group as we open the Bible and help you discover its relevance for our lives today! When you join the group, you will receive extra handouts to help you get to know the Bible, small focused assignments to make it more interesting, a reading plan to get you through an overview of the Bible in six months, and an opportunity to ask questions and find answers. You can join by following the link and asking to join the group: The Word of God: Alive and Active.

Want to hear from us occasionally?

What does it mean to perform God’s statutes? #d

🄿🄴🅁🄵🄾🅁🄼 “A man is not a pa

And, ye fathers, provoke not your children to wrath: but bring them up in the nurture and admonition of the Lord.
Ephesians 6:4