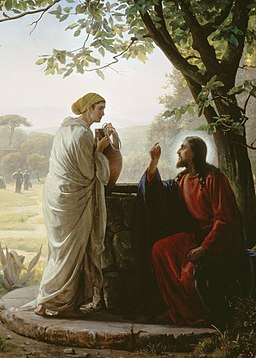 Palestine, in the time of Jesus, was divided into five regions, two on the east, and three on the west of Jordan.

Of these the most important to us are the three divisions between the Mediterranean Sea and the Jordan. We have constantly named the division to the north, Galilee, and that occupying the south, Judea. A broad belt of country about twenty miles wide divided these two. This was Samaria.

In order that we may understand the incident we shall speak of a little later, we will search a little into the history of this land.

Many centuries before the birth of Jesus (about 700 BC) an Assyrian king conquered the northern and central part of Palestine, which was then occupied by ten tribes of Israel, forming a separate kingdom from those two tribes occupying the southern portion of the land.

The Assyrian king took the Israelites captive and carried them into Assyria, sending peoples from Babylon, Cush, and many other countries of the east to take their place. These brought with them their own false gods.

When, later, many Jews belonging to the two tribes returned from captivity in Babylon (for the kingdom of Judah was also overturned because of its wickedness), the mixed population of central Palestine wished to join with them in rebuilding Jerusalem and the Temple. This, however, the Jews refused, fearing lest the worship of idols might thus spread among the returned captives. Thus there sprang up enmity, which grew worse as time went on, often involving bloodshed. The account of this feud is recorded in the books of Ezra and Nehemiah.

The Samaritans set up a new Temple, with its priesthood on Mount Gerizim, in the centre of what came to be called Samaria. They believed the Law of Moses, but refused to believe in the Psalms and Prophets.

With this general knowledge of this people we shall be able to understand better the allusions to them found in the gospel story.

After Jesus had cleansed the Temple, and worked many miracles during the Passover week, he stayed in Judea for some little time, his disciples baptizing those who believed on him.

Then Jesus left Judea to go to Galilee. Very often in passing from Judea to Galilee the Jews would avoid crossing Samaria, by passing over the river Jordan and journeying along the eastern side until they could cross again into Galilee. It was a longer journey but it avoided Samaria.

Nevertheless it is written, Jesus “must needs go through Samaria.” There was a reason. We will see what it was.

With his disciples, Jesus left the hospitable country of Judea and entered the country of Samaria. The journey was tiring. Nearly fifteen miles had been covered, and though it was winter, the morning sun grew hot. Two high mountains lay before them, and their road followed the valley which ran between. In that valley was a resting place by a well, and Jesus, being weary, sat by the well-side.

He sat along, for the disciples had gone forward some little distance to the city of Sychar to buy bread.

It was now mid-day, and Jesus was thirsty. But the well was keep. It was far deeper than now, for besides a gradual accumulation of soil at the bottom, there are thousands of stones in it which have been thrown down by visitors to test its depth.

Then came a woman of Samaria to draw water. We can imagine her as she walks easily along the pathway, carrying a pitcher onher head, and a coil of rope in her hand. She is not surprized to see Jesus sitting there. It was a favourite resting-place during the heat of the day. But she is surprised at his request, “Give me to drink.”

Why should she be surprised at so simple a question, especially as it was in an eastern country, where people freely give food and drink to strangers? Was it not because Jesus was a Jew? He looked like a Jew, he was dressed as a Jew, he spoke like a Galilean Jew, and therefore “because the Jews have no dealings with the Samaritans,” the woman was surprised.

But Jesus gives her cause for yet greater surprise, for then he tells her that if she knew who it was that asked of her, and of the power he possessed, she would then have asked him for living water. We can well understand that the woman should still think of natural water, and even when Jesus speaks of this living water as being “everlasting life” the woman asks for it, not that she may live for ever, but that she may not have continually to come to draw from Jacob’s well.

Excerpt from The Life of Jesus Christ by W.R. Mitchell

𝔚𝔬𝔯𝔰𝔥𝔦𝔭 To bow down and knee

“From the rising of the sun to its setting, the

Have you visited our blog recently? Lots of intere

But who am I, and what is my people, that we should be able to offer so willingly after this sort? for all things come of thee, and of thine own have we given thee.
1 Chronicles 29:14